Whilst on dezeen, you might want to look at a 2012 posting: Beyond The Body by Imme Van Der Haak which contains this lovely video, described below:

A perception of appearance and identity

My work focuses on altering the human form by affecting its figure with just one simple intervention. Photos of the human body are printed onto translucent silk which will create the possibility of physically layering different bodies, ages, generations and identities.

In a dance performance, the moving body manipulates the fabric so the body and the silk become one, distorting our perception or revealing a completely new physical form. The movement then brings this to life.

Beyond the Body brings into being an ambiguous image that intrigues, astonishes or sometimes even disturbs. 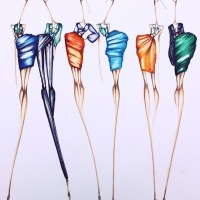