Having been very Interiors focussed over the past few weeks, I’m now catching up with all the Fashion Week shows that I’ve missed and, woohoo, Matty Bovan LFW RTW Fall 2018.

I did see the images of Matty Bovan’s show amongst the first collections to sashay along the London catwalks and it is just so much fun … like the Valentino of Haute Couture week, it caught the eye of many Insta illustrators.

The helium filled balloons are possibly the most eye-catching novelty of the RTW shows (for me, Valentino’s Philip Treacy Haute Hats just edged it in overall impact), at least until we saw the drone-carried handbags of D&G fly down the Milan Runway a couple of days ago.

Though helium filled balloons and some rather fetching shapes and styles to wear caught the eye, there were some wearable, outfits rocking some serious edge for those who like to be a little ‘out there’ attention-wise without looking too ridiculous, as seen in the first image below, but it’s really all about just way more balloons  balloons, balloons.

So, lots of laughs and edgy style: the kind of show that London is all about.

(Catch up on all the shows with the Vogue Runway App via the App Store.) 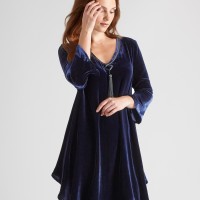