Reading a news item from Phaidon, promoting the release of a new luxury edition boxset, Saving Grace: My Fashion Archive 1968-2016, I was intrigued to note, amongst other remarks by Grace Coddington, on Tim Walker and his work:

Walker’s tenacity served him just as well in his 2014 tribute to the 20th century couturier Charles James. “In our Charles James spread, inspired by Cecil Beaton’s famous group portrait, the gorgeous – ivory-colored dresses and accessories were actually made of paper ­created by the set designer Rhea Thierstein ­– an idea from Tim’s prolific imagination.”

I blogged, in March 2014, A Tribute to Charles James, about the Charles James exhibition at the Met, using the image from Vogue, above, by Tim Walker – whose work I’ve featured here a few times. Isn’t it even more inspiring to admire when you know that it’s entirely constructed of paper?

A beautifully created homage to the past that is totally contemporary in execution. 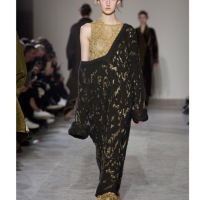