I have been seeing a lot of images of the stunningly beautiful Linda Rodin recently – she seems to combine style and ageing so effortlessly and without, apparent, surgery.

I have nothing against surgery – it might be a great solution for some and people are free to spend their own money however they wish – but I also have nothing against ageing.  It is the pressure on beautiful women and, especially, those who are in the public eye who just seem to be crucified if they allow the visible signs of ageing to be seen upon them that I object to.

Why are ageing women ostracized in this way?  That’s a big subject, too big to do justice to in this short blog piece. The reality of it though has led many women to surgery that is, in effect if clearly not intent, mutilation.

I was watching a straight-to-TV film at the weekend with Dolly Parton, gaping at the screen in horror at the effects of whatever she has done to her face to try and ‘preserve’ her looks … and I don’t mean to single her out, she was just the most recent example of the horrendous effects of … what?  Poor surgery, too many surgeries, trial and error surgery?  I really don’t know but how sad is it that beautiful, and not beautiful, women would put themselves under a knife rather than be seen to age naturally and that so many people seem to think that an option to carve ourselves up represents ‘progress’ for us?  Are we insane?

So, please, join me in finding women who age naturally inspirational, bring them to the fore, employ them, admire them and support them.  Ageing is a natural process and, as Woody Allen once remarked, not so bad when you consider the alternative.  Of course he meant death but being driven to, and living with, mutilating surgery to try and make you feel ‘good’ about yourself surely shouldn’t be an acceptable alternative?

Yes, I know Linda Rodin has been blessed with great natural genes but, somehow, those of us who aren’t struggle through to middle age, mostly, so let’s all just keep going a little longer, no?  Do let me know what you think. 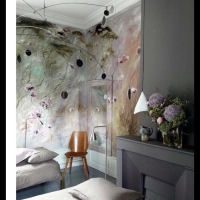